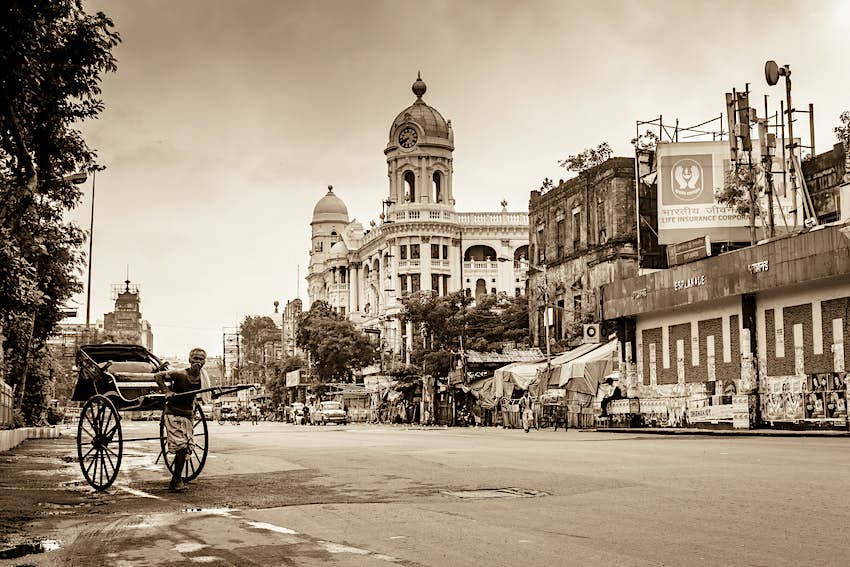 A monochrome view of the city of Kolkata ©ABIR ROY BARMAN/Shutterstock.com

It is impossible to date Calcutta, and yet, in its modern avatar, Calcutta has a date of birth, all thanks to the British and their record keeping. Its official birthday makes Calcutta exactly 330 years old this year.

“This day at Sankraul (a village on the west bank of the Hooghly) ordered Capt. Brooke to come up with his Vessel to Chutanutte (Sutanuti) where We arrived about noon but found ye place in a deplorable condition, nothing being left for our present accommodation & ye Rains fallings day & night.”  The words that mark the description and the conditions of Job Charnock’s arrival in Calcutta on are prominently displayed at Victoria Memorial, one of the grandest remnants of the British in Calcutta.

The day in question was 24th August 1690, when British troops, travelling from faraway Madras, had briefly stopped at a village called Sankraul, before finally anchoring at Sutanuti, a village by the Hooghly that the East India Company had already leased from wealthy local merchants. Led by Job Charnock, an agent of East India Company, the troops were to fortify Sutanuti and its neighbouring villages of Gobindpur and Kalikata. The villages soon combined to form the first version of the Calcutta we know today. Once fortified, the villages acquired an anglicised name, Calcutta, rewarded by their new masters. As the East India Company grew, so did their capital; businesses flourished, people came in, and in no time Calcutta became a bustling metropolis with electricity, tramcars, paved roads, and a strong colonial imprint.

Owing to its long, diverse and rich history, peppered with influences of the Nawabs, British, French, Dutch, locals, who had already been here, and the immigrants from all over the world, who came here to work; Calcutta slowly turned into the epicentre of languages, education, music, arts, culture, and everything one can associate with a refined city.

The author Bishwanath Ghosh in his book ‘Longing Belonging, An Outsider At Home In Calcutta’ writes “Charnock’s Calcutta no longer exists.” He further adds about Robert Clive, “The Calcutta we see today, bears an unmistakable stamp of another East India Company employee, who single-handedly elevated the status of the British from that of traders to rulers.” He, and many others, credit Clive with the construction of the present-day Fort William, planning of Maidan, the large stretch of empty land around Fort William that is characteristic of Calcutta today, and making Calcutta the megapolis that could compete with any colonial town in Europe. Today Clive’s Fort William serves as the headquarters of the Indian Army’s Eastern Command. The village of Kalikata that grew into Dalhousie Square is now BBD Bagh, Calcutta’s oldest commercial centre, and Sutanuti, where it all began in 1690, is present in chunks across the congested Northern part of the city. “The only mention you would find of it is in the signage at a metro station called Shobhabazar Sutanuti, otherwise there is no place today in Calcutta called Sutanuti,” concludes Ghosh.

Names hardly matter in a city where every brick speaks of its rich history. And while the birthday may be disputed given that the Calcutta High Court in 2003 ruled that the city cannot have a specific founder and a founding day, it is a good excuse to take some time and understand the complexity of Calcutta. A lot happened between Clive’s setting up of Fort William and its conversion into the headquarters of the Eastern Command of Indian Army. The city became British India’s capital, lost the status to Delhi, felt into negligence, regained its importance as an important cultural centre and whatnot.

The 19th century Calcutta overflowed with prosperity and diversity. Immigration of Chinese refugees, Armenian traders, Baghdadi merchants and Anglo-Indians made Calcutta melting pot of cultures. The social fabric continued to widen as Bengal Presidency expanded. Bihar, Bangladesh, Orissa and Assam, even North-West Frontier Province and the Straits of Malacca became a part of the Presidency. Later, as a result of British occupation and exiling of kings across India, Calcutta became an asylum to Indian royalty too. They brought a part of their culture and left their stamp on the city.

20th century Calcutta saw the shifting of power to the British Empire’s new capital, Delhi, and the subsequent neglect. By now the city, however, was self-sufficient in many ways and it continued to remain an important centre of administration even after the transfer of the capital. This in no way means it was an easy time in the timeline of Calcutta’s history. The city of chic clubhouse, fancy horse races and glamorous dance nights overnight became the hotbed of Indian Independence Movement and later the Naxalite movement. Though simultaneously it was also strengthening its unchallenged position in education, medicine, literature, arts, crafts, textile, and trade.

Calcutta, now Kolkata in the 21st century is a vivacious city. A buzzing metropolis in some parts and a quaint tree-lined colonial town in others. It is a city with layers and facets that you unravel slowly, gently, and languidly as you spend time roaming its quiet backstreets and walking its noisy bazaars. It is the city that remains synonymous with culture, literature, cuisine, art,  and music. It is the city that cherishes its past like no other city in India does, a place where finest restaurants and grandest cinemas of the colonial era are still valued, where centuries-old steamers still ferry people and where trams still have takers. And while parts of this 330-year-old icon of everything chic and elegant seem to be crumbling from the outside, its foundation is so strong that nothing can ever break it.