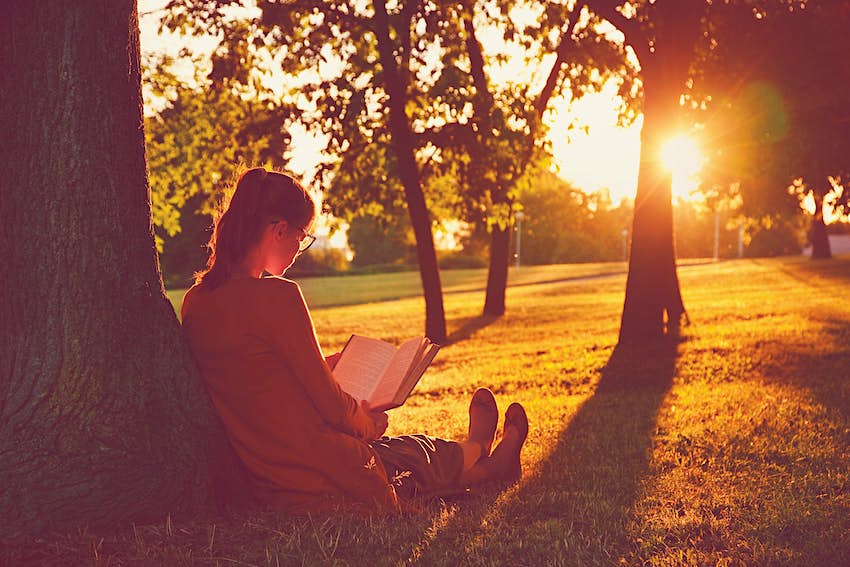 Books can take us to faraway places even when we cannot travel. ©Ivan Kruk/Shutterstock.com

‘If you are lucky enough to have lived in Paris as a young man, then wherever you go for the rest of your life, it stays with you, for Paris is a moveable feast.’ One of the most quoted lines from Ernest Hemingway’s novel decodes the joy of being in a place like no other.

It is not surprising then that A Movable Feast, Earnest Hemingway’s story of Paris of the 1920s, put many a wanderlust driven soul on the flight to Paris at a time when travel was just a necessity. More recently Elizabeth Gilbert’s journey through Italy, India, and Indonesia in Eat Pray Love set many a disillusioned traveller on the path for self-discovery through traversing the same countries and following the same path. And Hergé’s legendary title, Tintin’s Destination Moon, we reckon, may have inspired man’s landing on the moon which happened much after the book came out.

Readers, for centuries, have found refuge in stories that evoke a sense of place and books have sent many to retrace journeys described in them. The colour of the sky, the sound of the waves, the scent of a flower, the noise of a bazaar, any of this could inspire us to hop on the next train or plane to a new, unknown place. This Book Lovers Day, we look at how books have fuelled the vagabond in us for generations.

Fuelling love for the cities

“To me, a book has always been a portal to another land, inspiring a feeling of adventure and intrigue. Like careening across Argentina, Chile, Peru, and Venezuela with Che Guevara in The Motorcycle Diaries, or savouring the Durrell family’s slow travel affair with Corfu in My Family and Other Animals.” Travel and Food Writer Prachi Joshi tells us about the books that have inspired her uncountable journeys. “One of my favourite books is John Berendt’s evocative The City of Falling Angels, which made Venice come alive for me. The book, which is peppered with quirky, real-life Venetians, revolves around the 1996 fire that gutted the historic Fenice (the Opera House that is Venice’s pride).” The book, says Prachi, made her imagine Venice as a decadent and mysterious city with gliding gondolas and shimmering canals. “When I finally did visit Venice for the first time, it felt familiar even in its newness.”

Venice is not the only place people have thronged to after reading a book. Every major city in the world owes a part of its popularity to books that feature them and authors who make them unforgettable characters in their stories. Be it Dan Brown’s Origin that travels through Spain, William Dalrymple’s City of Djinns that unravels Delhi, or Arundhati Roy’s The God of Small Things that bring about the beauty of rural Kerala. Many books have turned its cities into its characters which the reader has not only fallen in love with but also pursed to experience and live in.

“Books have played a huge role in my journey as a traveller,” says Debashish Kar, an avid solo-traveller and backpacker who has travelled to far off places basis what he has read. Be it ancient towns across South India or medieval cities in Europe, books have shown him a world, says Kar, he would have remained alien to. One of his favourite travel books is The Great Indian Railway Bazaar. “This Paul Theroux Book from the 1970s opened my eyes to the beauty of India’s Railways. I have always been a lover of the railways, but this book presented it to me in a brand new light and put me on an unstoppable journey of discovering this vast network and noticing its mundane beauty.”

The Great Indian Railway Bazaar not surprisingly has been one of the greatest travel inspirations for people across generations and the world. Curious and enchanted by the stories unraveled by Theroux many set out to discover it on their own. His stories of these journeys- funny, frustrating, happy, and bemused, told in a matter of fact tone and narrated without judgment set a trend of travel books that were not written to please the reader but to report a place and an experience to them as it was. Theroux’s chance meetings — the Accountant General of Punjab in the Toy Train, the pilgrims enroute Mathura, beggars across the Grand Trunk Road make the narrative realistic yet fascinating and shows the reader the real people and real places.

If there are books that have drawn us to cities, there are also that have taken us away from them. Jack Kerouac’ On the Road explores the journey of Sal, the protagonist, from New York into the west. His desire to see the world unfiltered and becoming a stronger person in the process resonated with many a youth back then and now. Similar in theme but different in landscape, The Motorcycle Diaries traces the journey of two young men on a bike across South America. Set in the early 1950s, it takes the reader through their physical, emotional, and metaphorical journey. That one of the characters is Ernesto “Che” Guevara makes the book extra special.

“The one book that inspired me to do road trips is One Man Caravan by Robert Edison Fulton,” says legendary roadie, traveller and travel writer and author, Rishad Sam Mehta. “Fulton went around the world on a motorcycle in 1932 and the book was a result of it.” Rishad, who had the opportunity to talk with the author before his passing, not only holds a special place for the book but also uses it as a principal: he would rather drive than fly and ride than take a bus. “ I also like revisiting places from books,” says Mehta, “like Smiths on the Strand in London where Sherlock Holmes dined in The Dying Detective and a German POW camp deep in Poland that featured on The Great Escape by Paul Brickhill where I drove from Prague.”

While we may not be able to travel for some more time, we can still pick up a book and be transported to the place through its pages. Spending a day walking by the Seine, getting lost in the cobbled streets of Bruges, navigating the tricky slopes of Lisbon, tasting unknown food in Ho Chi Minh City, driving through rice fields in Jogjakarta or sauntering through streets of Seville, all of this is possible while sitting in your chair just by reading a book. “Some of my early inspirations have been books by Charles Dickens and Enid Blyton,” says Lakshmi Sharath noted travel writer and blogger, “these books created vivid imagery in my mind about people and places.” The kick of visiting a place from a book, says Sharath is unparalleled. And so, lockdown or not, armchair travel has been our favourite way of travelling and promises to remain so.